Controlling wind and wave action is critical for restoring the water quality of Utah Lake. By reducing the size and power of waves and increasing lake depth, the amount of force wave action exerts on the lake bottom can be significantly reduced and turbidity within the water column decreases. This improves water clarity, allows re-establishment of littoral zone plants, and removes the nutrients that feed toxic algal blooms.

Utah Lake will transform into a prime destination for sailing, water sports, fishing, and other recreational activities. It will also allow the lake to be restored to a clear water lake, with tens of thousands of acres of native aquatic littoral zones, millions of Bonneville cutthroat trout, June sucker, minnow species, and support the return of abundant wildlife species.

The placement of islands across the Lake create safe zones with little wind and wave action during wind events. This improves the recreational experience and potentially saves lives

Modeling by Geosyntec shows that in general there are lower bottom orbital velocities with the project in comparison to the lake’s current state due to deeper depths. It shows much lower orbital velocities on the leeward side of the islands. Some high orbital velocities are found on the leeward shore, due to reduced dissipation with deeper water, allowing energy to make it to shore. Overall, the results indicate the project will result in substantial reduction in wave-induced resuspension. The model shown below is with winds from the Northwest at 20 meters per second (44.7 mph). 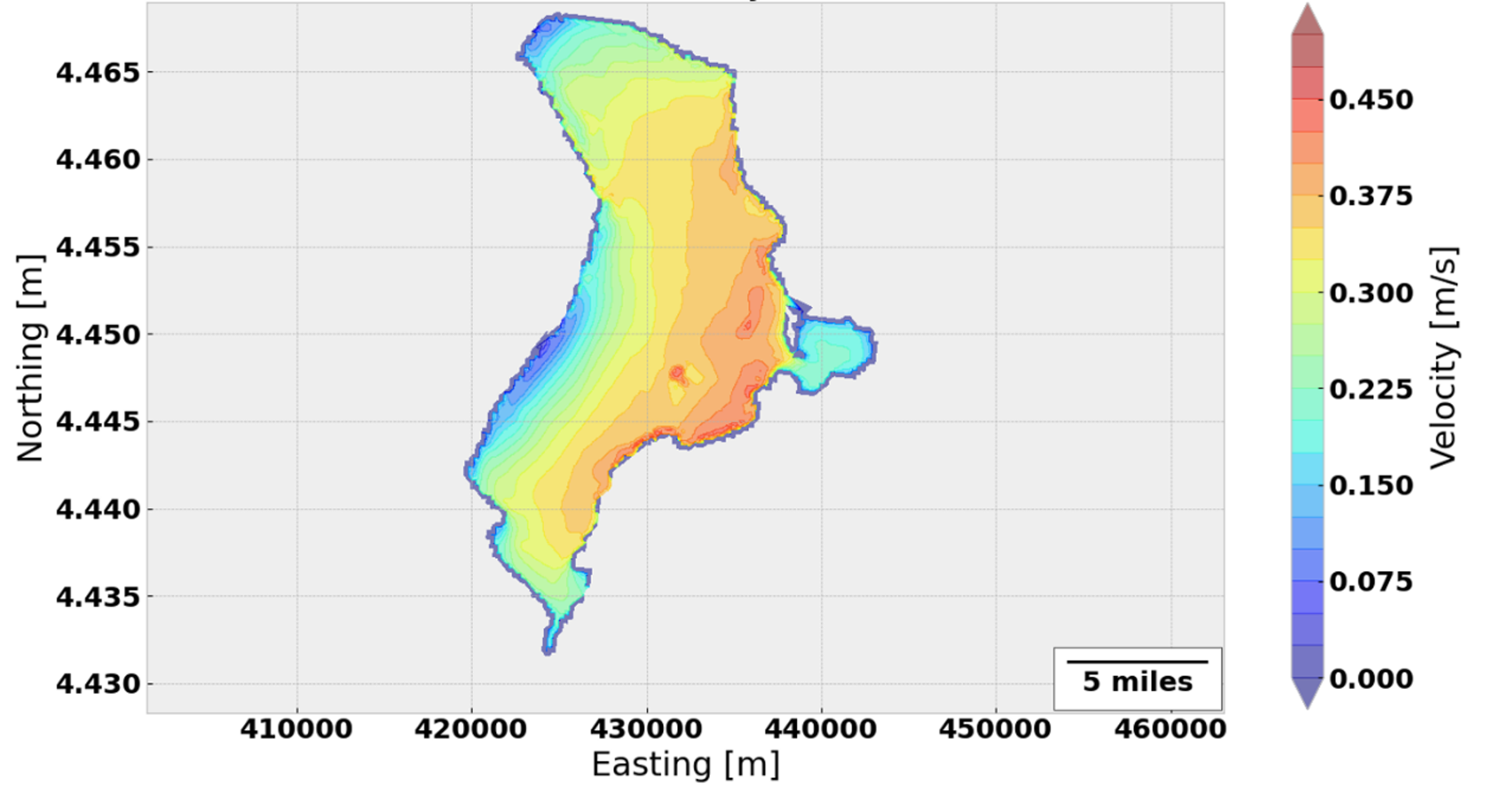 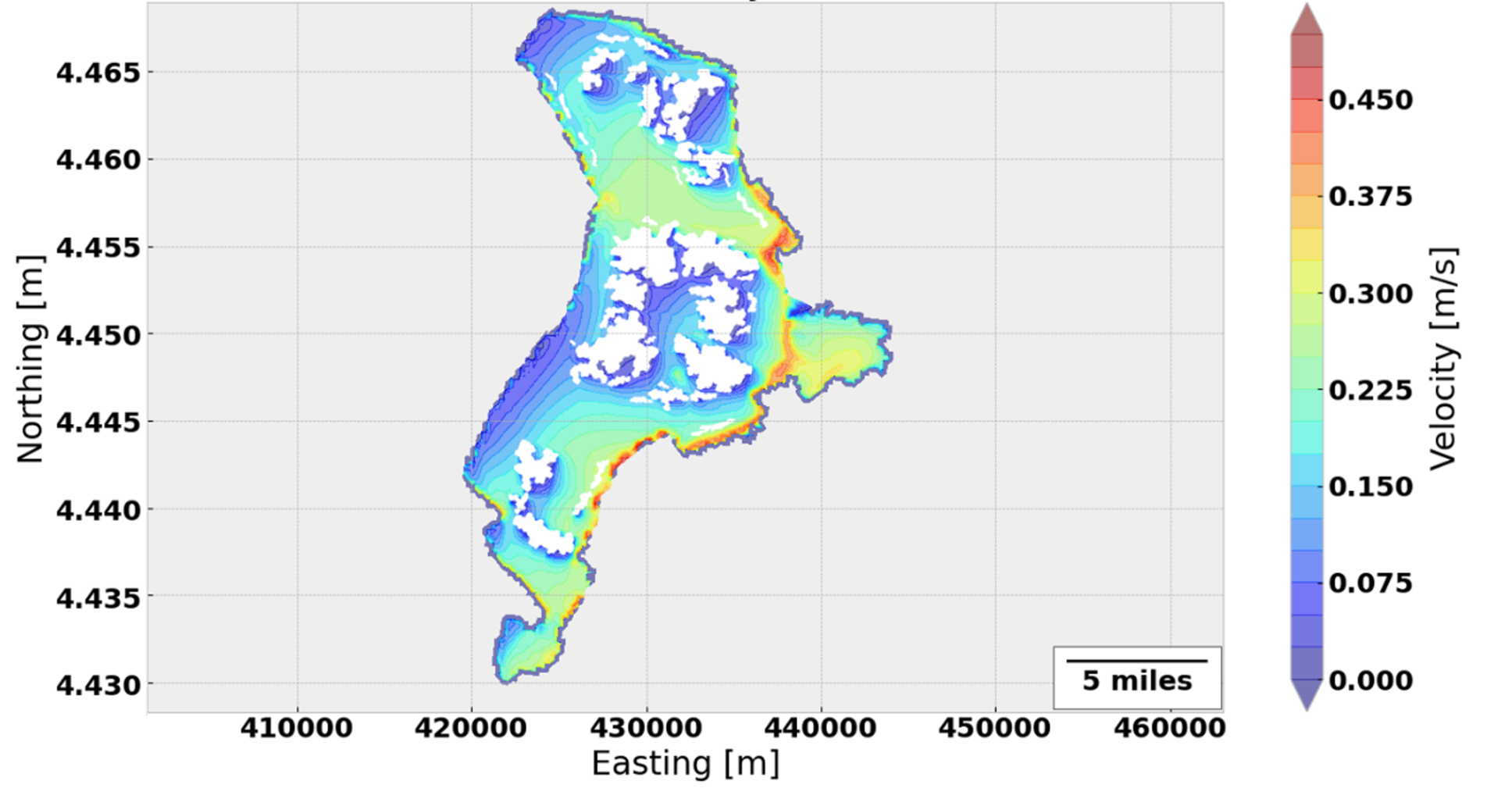 Reducing wave height and increasing lake depth through dredging creates a direct linear reduction in the amount of force wave action exerts on the lake bottom. When wave height is reduced and lake depth is increased, the combined effect produces a significant reduction in forces exerted on the lake bottom by wave action thus reducing sediment resuspension. 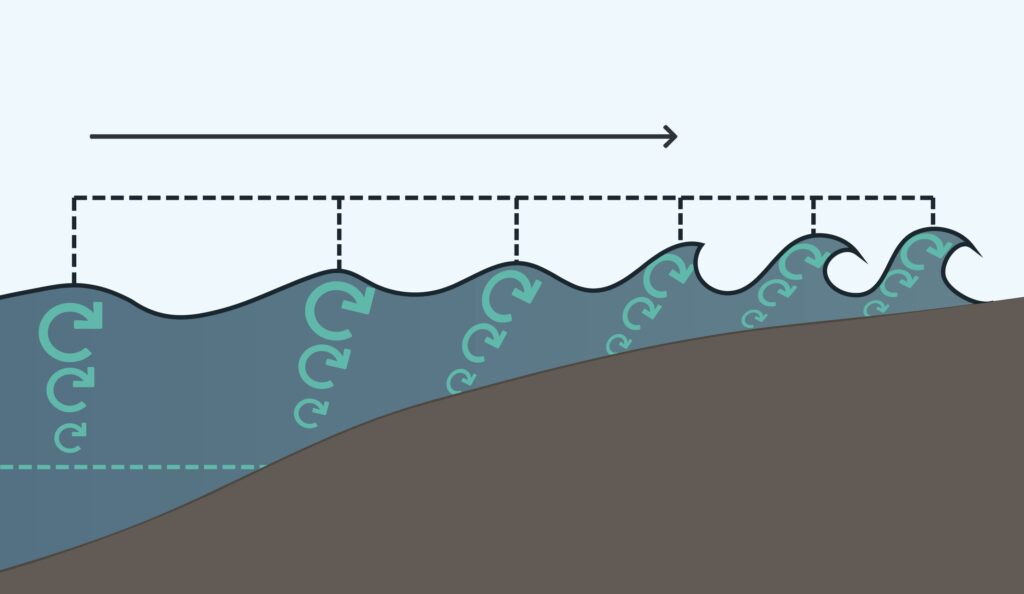 The following mathematical formula (Equation 1) explains how wave height and lake depth change the orbital velocity of the water, and hence the applied forces on the lake bottom due to wave action.

Our current wind and wave models along with our dredging projections, estimate that once dredging has been completed and islands have been created, wave force on the lake bottom (orbital velocity) will be reduced by 500% during a 26 mile-per-hour wind event, significantly reducing re-suspension of the lake bottom during wind events, and dramatically improving water clarity. The reduced orbital velocity is also a degree of vertical force which is insufficient to uproot or break aquatic plants as they are becoming re-established along the lake bottom.

Wind and wave action and lake bottom disruption will be reduced as a result of strategic dredging and island creation,  allowing the lake to transform from a turbid eutrophic state to a restored clear-water state.

Click the button below to learn more about other solutions that will improve Utah Lake’s water quality. 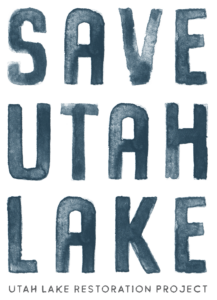 Hands-on volunteer service with our Save Utah Lake team is just a click away. Sign up and we will notify you as soon as a service opportunity comes up.

Hands-on volunteer service with our Save Utah Lake team is just a click away. Sign up and we will notify you as soon as a service opportunity comes up.

Just fill out this form!